The self-help industry is usually quoted being a ten-billion-dollar industry. Arguably, most of it is nonsense – or at the very least non-scientific. Modern gurus such as the notorious  life-coach-billionaire Tony Robbins, the alternative medicine advocate Deepak Chopra, and the author of The Secret, Rhonda Byrne, have sold millions of products to solve all of life’s ailments. These peddlers of easy answers, who often lack any kind of formal higher education, do have their critics. You can easily read exposes from journalists delving into the shady backgrounds of these practitioners, and debunking articles written by academics exposing the pseudoscience behind the claims of these life-coaches. However, there is a blind spot that seems to be prevalent both in the private sector as well as in academia. 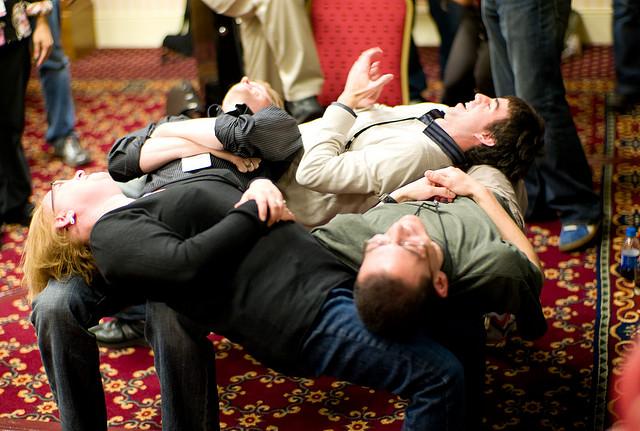 Most people who have worked in a corporation or academia have ran into these gurus of just a slightly different shade. They are often hired as “team-building experts”, “corporate coaching consultants” or any other title that doesn’t need a degree or other credentials to be used, but still sound vaguely reassuring. Team-building and other management-based trend words seem to hit the money spot when it comes to selling these seminars. Maybe it’s good marketing, or maybe it’s just the fact that you must have something at your HR days, corporate retreats or other semi-annual office get-togethers. It can’t all be entertainment: It must at least sound like you’re improving efficiency or productivity, or if all else fails, at least contribute to a positive work environment atmosphere.

These human equivalents of motivational posters make our managers and leaders dance on stage, have them playing tag or do trust falls to supposedly increase team spirit, strengthen the bonds between co-workers or make our leaders seem more accessible and human. It might be fun to some, but it should be a red flag to everyone. Educated leaders, be it in business or academia, are supposed to be experts. They are hired to lead the organization exactly because they are trusted to know the difference between gut feelings and scientific findings.

Deepak Chopra uses the word “quantum” often when he speaks. This does not make him a physicist. It does, however, sound profound to some people who don’t know better. In the same manner, it might sound profound to say, “there is no I in team”, but it does not help your organization to flourish. And managers and academics alike should know better. A simple slogan does not replace data or analysis, and quoting the Buddha or Sun Tzu’s The Art of War does not make you a sage.

This is especially true in institutions that claim to do research on business and management. When these institutions hire experts without scrutiny, it erodes the credibility of not just the institution that fell prey to these conmen but denigrates the whole field of academic business studies. And as a science, isn’t the whole filed on thin ice as it is reputationally?

These charismatic leaders are good at selling themselves. Trained professionals should be good at spotting pseudoscience from real science. Fool us once, shame on them; fool as for decades, shame on us. There is an old Finnish saying, apparently written down for the first time in 1702, that (very loosely) translates to a modern form of:” It is not stupidity if you sell snake oil, only if you buy it”.