Suddenly my rooftop on my house in Sundom/Vaasa where I live can reduce my living costs, and even be a source of income.

There is much happening right now, within the energy sector. The traditional one-way electricity flow from Utilities (power plants) via transmission and distribution companies to end users is in transition due to new technological solutions and the advent of distributed energy systems, also called Microgrids. A good pilot case, illustrating the logic of Microgrids, is the Brooklyn, New York, Microgrid, where ten households are connected, five households produce energy, based on rooftop photovoltaics systems for their own use, primarily, but in case of surplus, they can sell this electricity to the other five households in the grid (Mengelkamp, Gärtner, et al., 2017).

This sounds a promising energy eco-solution for benefit of many. But it arises also questions: who of my neighbors do I want to connect with, who wants to connect with me, and to whom are we going to sell our electricity? A quick scan of my neighborhood, with a focus on renewable energy resources, meaning solar panels on the rooftops or windmills in their backyards, turned out to be a sad story.

Conclusion is that although Vaasa is branded the sunniest city in Finland, we do not have many solar panels yet. The FinSolar report “Aurinkoenergian markkinat kasvuun Suomessa” describes an exponential growth in solar energy production since 2015, although its share of the total energy market is small (Auvinen, Lovio, et al., 2016). My top roof is not big, but there are other players with huge top roof areas, take Walmart, Apple and IKEA for example, companies which invest heavily in renewable energies.

Sundom Microgrid (in my mind), as a localized grouping of electricity sources with battery capacities, could be a fully flexible system which, dependent on electricity supply and demand, reliability and the price of electricity, switches between two levels of operation: autonomous and disconnected from the Macrogrid, or non-autonomous and interconnected to the grid (Figure 1). 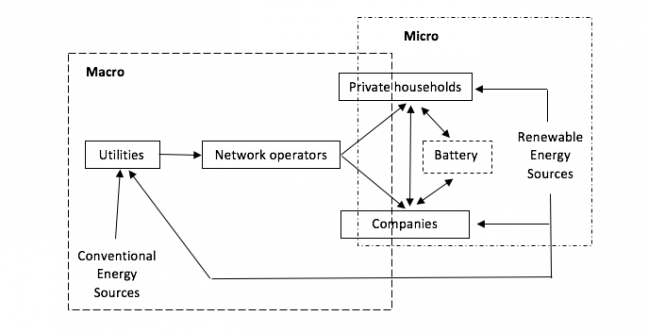 To get the Sundom Microgrid to work, the physical Microgrid including enabling technologies, such as solar panels, connections, automation, grid stabilization, storage and intelligent control systems as well as the Virtual community energy market platform, are to be decided on and put in operation. Energy generation and distribution in Peer-to-Peer energy trading systems cannot work unless the pricing mechanism, payment rules and metering systems have been agreed on. For this to work efficiently, Blockchain technology is to be adopted. I, as a prosumer (energy producer and consumer) in Sundom Microgrid, can benefit from this emerging information technology in at least two ways. The system is claimed to be secure, and I am promised faster and cheaper transactions of payments, agreements and metering information.

In case I do not want to install a Photovoltaic system in my house myself, maybe my neighbor or somebody else would like to rent my roof. In the SESP – Smart Energy System Research platform  project  which is our joint research project with Vaasa University, 2017–2018 – has nine work packages, of which work package 8 is deals with new service concepts and business models.

We have two focus areas: Microgrids a) challenge established companies to rethink their business models and b) open up new business potentials for new entrance; we ask how, what, why and when. All this keeping in mind that the Finnish electricity market to some parts still is strictly regulated (Joenpolvi, Hailikari & Pirttilä, 2015).