Skip to content
“Going so soon? I wouldn’t hear of it. Why my little party’s just beginning.
~ Wicked Witch of the West Wizard of Oz”
― L. Frank Baum, The Wonderful Wizard of Oz

Hey, guys! It’s Maria again. As the exam week has finished, we all could breathe a sigh of relief. While you have already had the opportunity to follow some of the events happening at Hanken from the previous blog posts (and you can also check Hanken’s official Instagram to keep up to date with the current events), I thought that this time it might be interesting for you to get to know a bit more about the fun part of the studies at Hanken: namely, the student life. This idea popped into my head as it was just yesterday we had a sitz organized by the Master’s Committee and Exchange Committee of the Student Union.

However, first things first: you might be wondering what a sitz is. I will not invent anything new here and will refer to our beloved Wikipedia: “A sittning (“sitting”, often shortened to sits or sitz) is in Sweden and Finland a seated meal held within a set time frame. The term is also used to denote the part of a party that is a seated meal. Though it can refer to any kind of meal, it is often used to refer to a student sittning.” To my knowledge, in Finland those are only Swedish schools that have a tradition of organizing sitzes, so no wonder they are so popular in Hanken.

This Saturday the two student union’s committees, the master’s committee and exchange committee, have combined their forces to throw an amazingly nerdy sitz called “E=MC^2”. 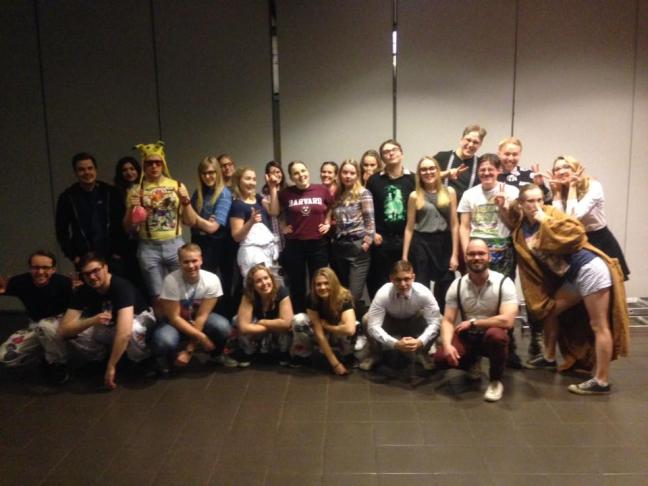 That is one feature of the sitz: there is always a theme according to which the guests should be dressed. However, it was not only about the costumes, the party was full of nerdy facts and interesting competitions, which kept the audience entertained and yet gave some food for thought.

There are more traditions connected with the sitzes, however this is somethig one can experience only by attending one of those themselves.