Poland, after economic transition, moved from being the beneficiary of the humanitarian aid to a donor country. However, as my recent interviews suggests the memory of assistance received from abroad years ago is still alive among generations, which remember economic crisis in Poland, especially during 1980s. This note is focusing on assistance via parcels, mailed often from family to family. Such parcels were posted to Poland in 1980s, while in March 2014 Polish people supported this way Ukrainians.

Poland, unlike Western Europe, did not participate in Marshal Plan to restore European Economy after 1945, post-war reconstruction, nationalisation of almost all companies (only small shops and farming was allowed) which were centrally managed resulted in inefficiencies, foreign debts and finally economic, as well as political crisis in late 70s. The Solidarity movement, which called for reforms, was supressed by communists. In 1981, December the 13th martial law was declared. During 1980s economic crisis deepened, rationing was introduced (food products, clothing and other basic goods) shops were empty. Allotments and small private farms provided food, whole system unofficial trade was created. This was the time, when Western countries provided support for Poland, as gesture of solidarity, but also as part of the movement against communist bloc.

In 1980-81 German and Swedish post offices allowed free postage of parcels to Poland, millions of people prepared and mailed items to Poland. In addition there were convoys with help, distributed mainly through the Catholic Church (Caritas Poland was re-establish to distribute such support, as it was banned after the war). Hundred thousands of Polish people, including author of this note, were receiving material support. However, even more important was the message that Poland is not alone in the struggle for freedom. This was not only humanitarian, but also political support.

Communism has dominated until end of 1980s, with beginning of transformation in 1989. Poland went through “shock therapy”, with rapid privatisation, opening of the markets, massive fall of state industries. Social costs of transition was hard for some groups, such as workers from collective farms, or small towns that were dependant on large employer, in 1990s early 2000s it was common to see places with 40% unemployment rate.

Flow of direct investments, availability of cheap and skilled labour, followed by entry to the EU in 2004, which allowed exporting the entire labour surplus abroad, resulted in constant economic growth. After 2004 funds stimulated improvement in infrastructure and quality of life, of course in exchange for unlimited access to the Polish market. As result of the changes today, in 2017, Poland moved from being recipient of humanitarian aid to donor country. 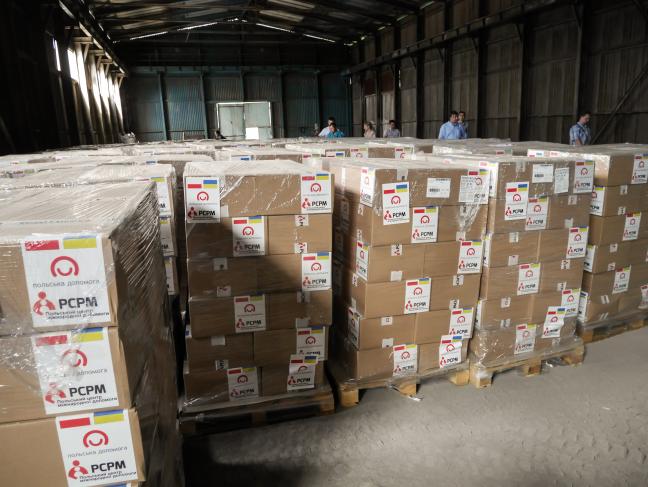 While economic conditions improved, the crisis is still in the memory. This was demonstrated during Ukrainian conflict. The Polish Post Office (Poczta Polska) had short action “Family to Family”. In less than one month, in March 2014, over 25000 parcels were posted to Ukraine, including over 9000 parcels prepared by Caritas Poland. Each parcel included food and hygienic goods, with total weight up to 20kg. When the action was promoted in Poland, there was wide reference to the help in 1980s when Polish people were receiving parcels. Nowadays people wanted to “pay back” sending parcel to Ukraine, which was less fortunate in transition. Similar rhetoric was among politicians and church officials, so the memories of the support from over 30 years ago are still around.

This is not the only involvement of Poland, offices of international organisations: Caritas Poland, and Polish Red Cross, are active abroad. Humanitarian organisations established in Poland, such as the Polish Humanitarian Action, initially created to support people during Balkan wars, Polish Center for International Aid or the Polish Medical Mission are operating across the globe providing both humanitarian and development aid. The Polish government is promoting help to refugees near the places where the conflicts are taking place, as more efficient mean of support than encouraging risky migration to Europe.

The case of Poland allows analysing how economic transition and development allowed change from being recipient of the aid to donor country, how from common food shortages Poland moved to be one of the food exporters.

Piotrowicz, Wojciech (2009) Retail reflection. Shopping on the other side of “Iron Curtain”. The Retail Digest, Summer. pp. 12-21

Information about “family to family” action 2014