Zombies. Walking dead. Living dead. Popular culture has given many names to the terrifying idea of creatures stuck between death and life hunting the living for their flesh or brains. My fascination for zombies started with the AMC series “The Walking Dead”, which my husband started watching in 2012. From the start, I didn’t want to watch it since I am easily scared, but I couldn’t avoid hearing it from a different room. Soon enough, I was hooked by the plot and characters, and had to find myself a spot in the sofa every night the show aired, prepared with a pillow in my hand to hide behind when the zombies attacked.

Credits to the AMC Network Entertainment “Dead Yourself” App

Having now watched several seasons of The Walking Dead, and other zombie films, I have gotten used to seeing decomposing undead tearing apart living people on the screen, and I am no longer as sensitive as a few years back. The interesting thing with this series (in addition to the plot of course) is that it plays with the thought of society completely falling apart, leading to a situation where the remaining population is struggling to sustain life. Not only the epidemic itself but also fear of it drives people from their homes and work, and they fight for resources.

What the characters in The Walking Dead experience may be fiction, but the story also depicts a catastrophe that has gone out of hand. The zombie metaphor can be useful to model the worst-case scenario, and was actually used by the Centers for Disease Control and Prevention in the US in 2011 in a risk campaign to raise awareness of why and how to prepare for emergencies. 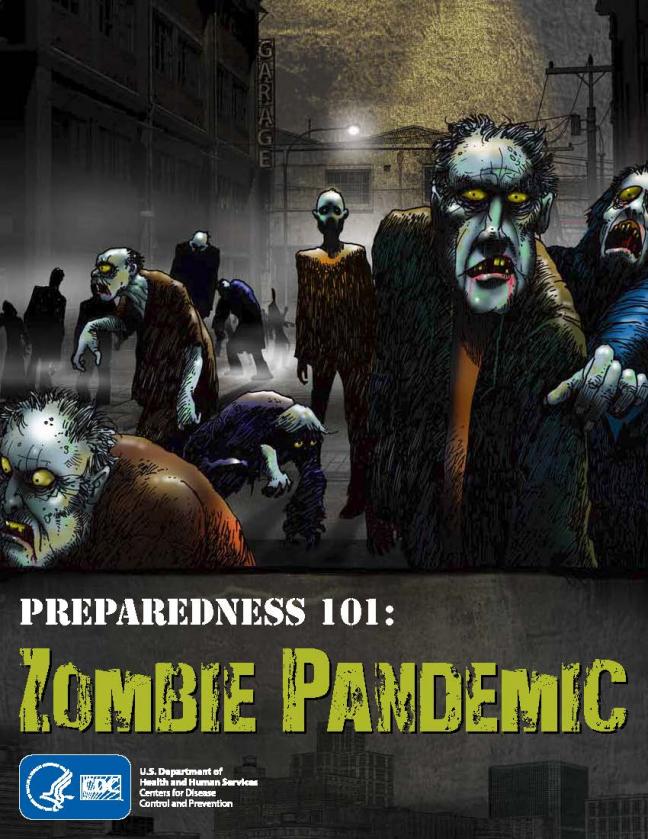 References to zombies can also be found in scientific literature. Nasiruddin et al. (2013) (giving the CDC campaign as an example) parallel zombies with infectious deceases such as rabies and argued that zombies can be a powerful tool for increasing awareness of issues that relate to public health. Guitton and Cristofari (2014) comment that the zombie apocalypse metaphor has also been a good way to incorporate the human factor in crisis management and educate people for better preparedness, because of the “apparent randomness of the event, unprepared population, destruction of social structures, mass mortality, and the extreme degradation of environmental conditions” (p. 376). Munz et al. (2009) even mathematically modelled the outbreak of a zombie infection, and others have followed their work. Smith (2015) calls for funding and international cooperation between scientists and governments to tackle the threat of zombies, and issues related to dealing with them (for example the ethical issue of whether killing an infected individual is a crime or not).

On a more personal level, the discovery of zombies has made me start thinking about how I would behave in case of emergency – do I have a radio, food and water to last a few days, medication and other relevant things? I know there are some gaps in my own preparedness, and I should fill those gaps before the zombies stand on my doorstep.

If this post made you start wondering what things one should have at home to be prepared for all kinds of disasters, I can recommend you to check the list in the CDC’s zombie comics (https://www.cdc.gov/phpr/documents/zombie_gn_final.pdf), the American Red Cross Survival Kit list (http://www.redcross.org/get-help/prepare-for-emergencies/be-red-cross-ready/get-a-kit), or your own country’s instructions for how to prepare for emergencies (in Finland’s case, turvaopas.pelastustoimi.net).