Skip to content
26.1.2017
As a part of MELOGIC Project, we conducted a field study in order to identify the needs and main challenges of the end-user partners to improve their emergency logistics management

The MELOGIC project stands for ‘An Integrated Methodological framework for Emergency Logistics’. The primary objective of the project was to provide an integrated, easily applicable tool for optimising logistics preparedness operations. In December 2016, the project was completed after all deliverables have successfully been achieved, including web-based decision support system available online. Over the last 2 years throughout the project, there have been various intense discussions, learning opportunities, and knowledge sharing. Personally, it was an extraordinary experience to have the good partnership and active interactions among the project members.

Most of the humanitarian logistics research projects in the HUMLOG Institute are often carried out in developing countries. However, the MELOGIC project has mainly concerned the issues related to emergency logistics within the EU context. This difference brought some new perspectives on disaster logistics preparedness.

While the results and research outcomes of the project can be found in some publications that are in progress, I thought it might be interesting to describe some practical but memorable aspects of the project. It would be some sort of ‘behind the scene’ of all these research activities, which may not be narrated in research publications in details. Here I will elaborate initial development of the project and in the next post some of major outcome – emergency drills and table-top exercise.

The first kick-off meeting was held on February 2015 in Nikosia, Cyprus. The ‘logistical problem’ was remained as a general statement in our project document. Thus, in the first meeting the partners tried to crystallise the problem that we would deal with in our project. Naturally, the focus was on the needs of the only end-user partner then, Caritas Teruel. Caritas Teruel brought up their logistical challenges related to maintaining a good preparedness for the forest wildfire of the Aragon region.

The part of the HUMLOG Institute work package was to map the emergency logistics needs and problems. Although a plan for field study was not included in the initial project document, we realised the need of the field study before long. Our objective, which was to develop an applicable decision support tool, required much more in-depth understanding of the local context, including the identification of the governance of civil protection system, relevant actors, important decisions process, and other challenges and bottlenecks of the emergency logistics preparedness. So the field study was quickly organised together with Caritas Teruel. We prepared the one-pager concept note and the interview guide. Caritas Teruel arranged interview schedule and all the other field practicalities. 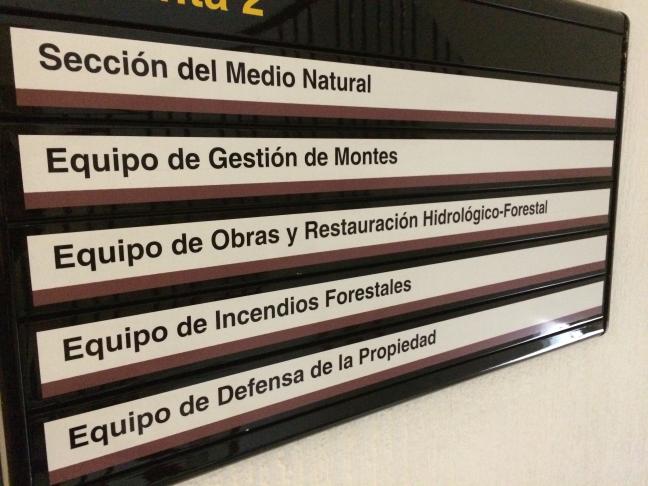 A visit to the local government concerning forest wildfire

One of the many interviews was with the previous Major of the village, Ejulve, which was hugely affected by forest wildfire in 2009. This Ejulve forest fire was an important incident of the Aragon region and often interviewees have referred to this forest fire during their conversation. 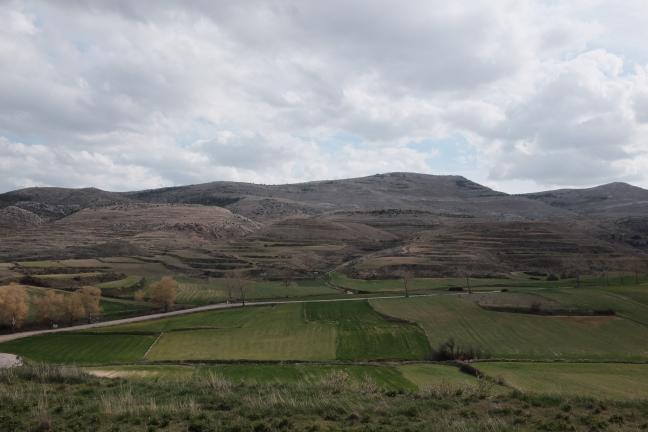 After more than five years, still the mountains are not yet recovered. Fortunately, there are various conservation programmes supported by both local government and EU. 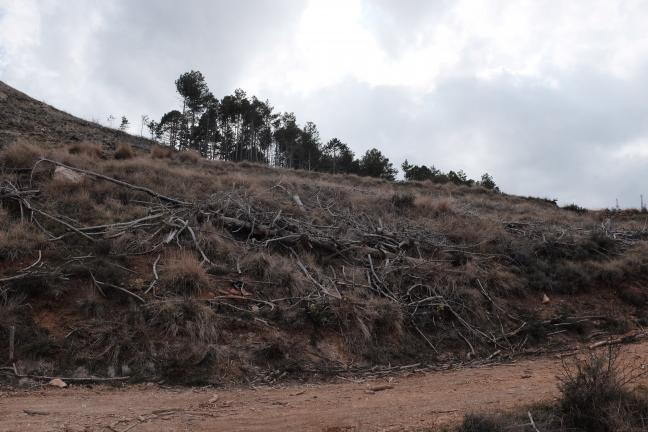 Burnt trees on the side of the road. 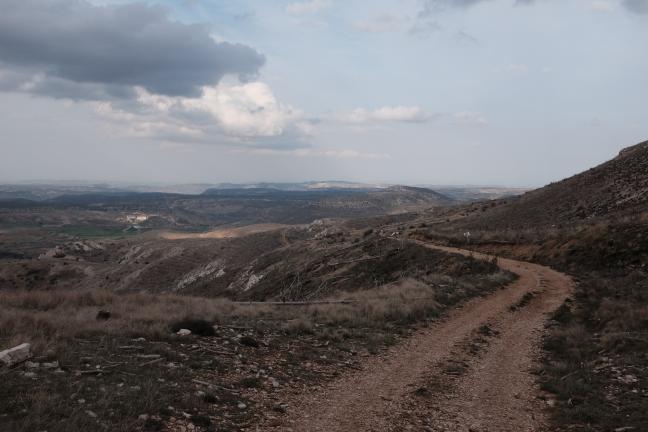 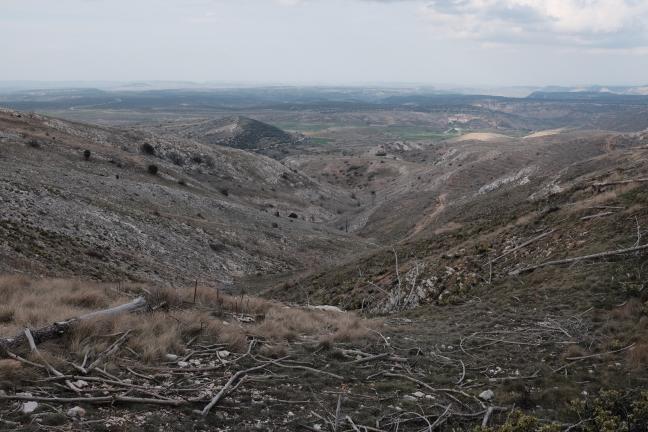 The scale of the Ejulve forest wildfire was immense, affecting more than 7.000 hectares. 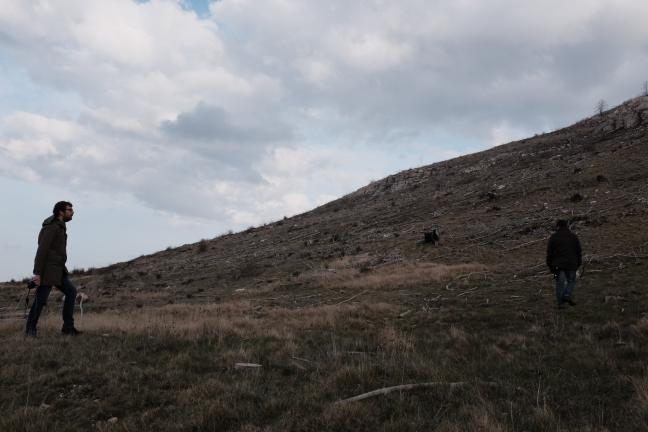 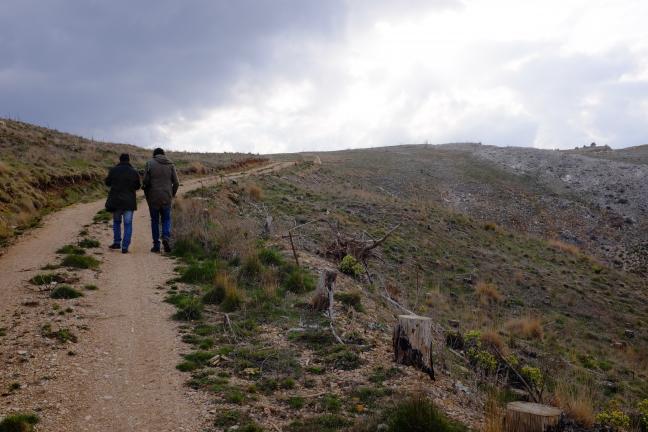 Interview was conducted in the Mayor’s vehicle that we drove to the mountain but also while walking on the mountain.

In retrospect, field study helped very much all the project partners to improve the initial understanding about the project and its aim that were remained at a very general level. It sounds very self-evident that the results of the field study was the crucial base of the decision support system model development, but at the beginning of the project, linkage of each working packages were weak and very uncertain.

A multiple Skype conference calls among Aegean University, Caritas Teruel, and HUMLOG Institute was extremely important before, during, and after the field study. Aegean University, Caritas Teruel, and HUMLOG Institute have collaborated while maintaining each role in the project as a quantitative modeller, end user, and qualitative investigator. In the end, we build mutual trust and good ‘friendship’ to continue working on the project, which is crucial in mediating different views on some issues and also some particular demand for detailed data. This is reinforced throughout the project meetings and also with some generous wines and foods (from Southern partners) and vodka and minimalistic dinner (in Finland). During the project we often joked and smiled by saying ‘problem solved’ after intense discussion and sometimes difficulties of communication.

Read more about the project here.